Make-up, beards and a hospital stay

This last Sunday I decided to do something I've been wanting to do for a while. I played "make-up" with Bekah. I put a little bit of eye shadow and blush and just a touch of lipstick on her. Just for fun.

And of course, Gavin saw what I was doing and wanted to join in on the fun. So I decided to draw a mustache and a beard on him. He looked very devious :)

And or course, Bekah wanted to have a mustache and a beard drawn on her face, too. 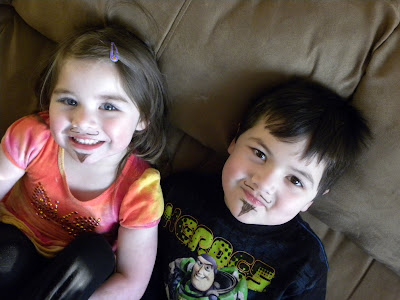 Then about four hours after our make up fun, Gavin got sick.

He was camped out on the loveseat for the afternoon, quiet and lethargic. Then he started throwing up. He threw up about a dozen times between 4pm and 7pm. My poor little guy, I felt horrible for him.

At about 7:30, I made him a bed on the floor in his room. Just in case he needed to throw up, I wanted him to be able to reach his puking bucket. I put "Megamind" in his DVD player and went in to Bekah's room and put her to bed.

At about 8pm he fell asleep. I was keeping my fingers crossed that he wouldn't wake up sick...

Ten thirty pm and he woke up throwing up. After I cleaned him up, he went back to sleep until about 2 am. This time he woke up with diarrhea. Then he threw up.

This cycle continued every one and a half to two hours. Pooping, puking, pooping, puking. By morning,I knew that he was in no shape to attend his first day back to school after Spring Break.

I ended up taking the day off as well and stayed home to take care of my sick little guy. The vomitting never stopped. I was starting to get worried because he was getting dark circles under his eyes and he couldn't even keep water down. By now, he was dry heaving.

We ended up having to take him to the doctor, where we found out that he had lost about 6 pounds in 24 hours. The doctor wanted to get an IV in him to give him some fluids because he was suffering from dehydration and fever. Unfortunately, they weren't able to get the IV into his vein so we ended up having to admit him into the hospital for an overnight stay.

At the hospital, it took 5 more tries before they could get the IV into his little veins. It was so heartbreaking listening to his cries and screams while they tried to get a vein. The nurses were getting frustrated and I was getting mad. I felt so helpless!! Finally, they called an ER nurse to do the job and, thankfully, he succeeded. 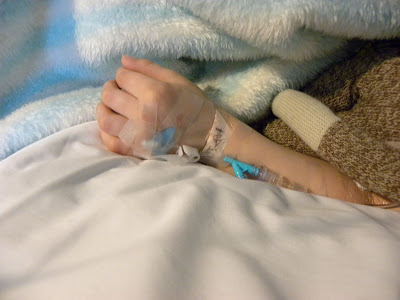 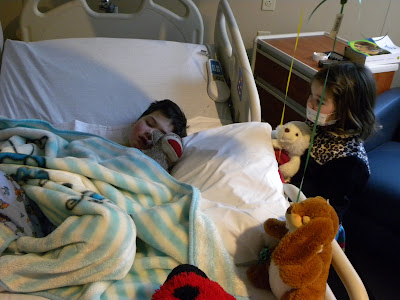 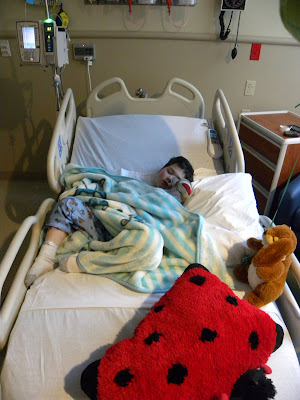 Erin stayed the night with him so that I could go home and get some sleep since I was up with him so much the night before. It was so hard leaving my son in the hospital. So hard.

He was doing so much better the next morning and was released and back at home by 9:30 am. But he still wasn't himself. He spent the majority of the day on his mattress upstairs watching tv. He was still fighting diarrhea. 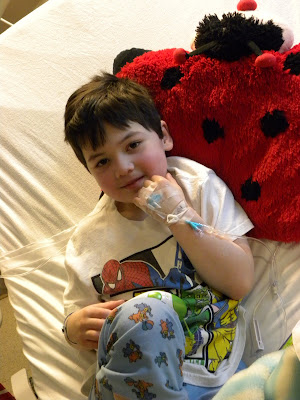 When it came time for bed he requested his puking bucket, "just in case". He finally fell asleep watching-you guessed it-"Megamind".

I had to get up three times with Gavin that night to help him with the diarrhea that just doesn't want to leave his body. That was last night.

Today I was concerned about his lack of eating, his diarrhea and his lethargy. I spoke with the doctor and she said that unfortunately, it may take a few days for the virus to leave his body. But she did say to keep pushing the fluids and maybe start him on solid foods tomorrow. The last real meal Gavin had was lunch on Sunday. :(

As of right now, he seems to be slowly getting better. He is still having tummy issues and is afraid to eat anything because he thinks he'll throw it up. I'm just concentrating on pushing the liquids on him to make sure he doesn't get dehydrated and have to be admitted again.

Isn't it amazing, though, how things like this make us realize that we take the little things for granted? How I really miss my rowdy, outgoing and tenacious little guy right now! (Remind me that when he is back to himself and I am pulling out my hair in frustration!!)

I just can't get over how fast it took for him to get sick. Seriously, the first picture was him just a few hours before he got sick. I never even seen it coming. So now we are all just waiting for our little guy to get back to himself. I'm ready for this to all be over.

Posted by 4theloveofmyfamily at 9:05 PM 3 comments

I love my little leprechaun!! Isn't he cute? 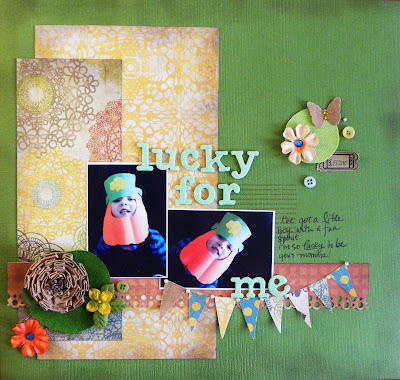 I made this layout for the new challenge at Scrap that Baby! I used some goodies from my March kit from Scrappy Chics. 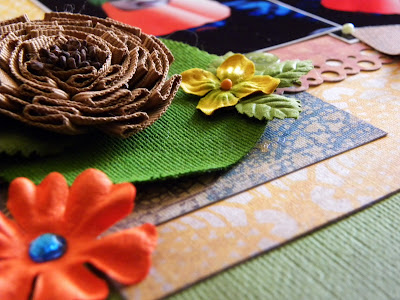 I can't wait to show you more of what I've been working on!!!

Posted by 4theloveofmyfamily at 8:36 PM 1 comments 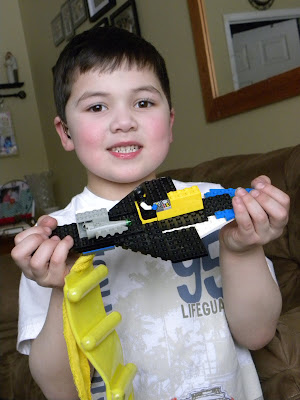 My five year old loves Legos. I mean, really, what kid doesn't? Or adult for that matter! They are bright and cheery and very educational-they teach you that it really hurts to step on one!! 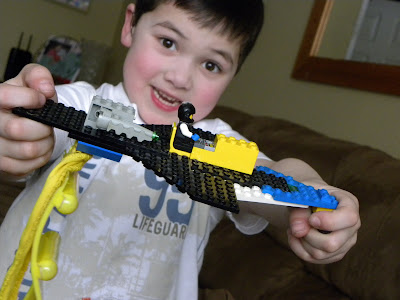 Sorry I haven't blogged in awhile, I've been getting ready to redo my scrapbook area. Yay!! I will post pics when I'm done. I also just got the April kit from Scrappy Chics and oh...It's amazing! Stay tuned fot some sneak peeks!!

Posted by 4theloveofmyfamily at 8:20 AM 0 comments